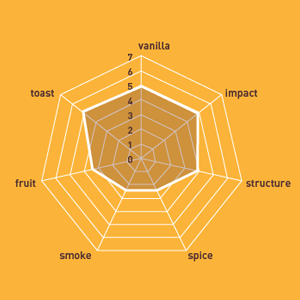 NAPA, Calif. (February 16, 2016) – Cooperages 1912 is expanding their World Cooperage Profile Series with the development of the Dimension barrel. Dimension is the third barrel to be launched in the series utilizing infrared technology.

“Our infrared technology was introduced in 2012 with two barrels– Aroma and Reflection,” said Elizabeth Van Emst, general manager. “We wanted to expand the series by launching a new infrared toasted barrel focused on texture and length as well as complexity of flavors and aromas. We unlocked the key to finding texture by utilizing contour stave technology. In addition to texture, Dimension offers layered aromatics of rich vanillan and toast and a prolonged, velvety finish.”

“The surface area is increased by 20.4 percent in this barrel,” said David Llodrá, research and development director. “As a result, there is a higher impact of aromatics than when regular staves with a smooth surface are toasted. We also developed a proprietary combination of wavelengths to specifically complement the contour staves. This toast and stave pairing makes an ideal barrel for Chardonnay fermentation and red varietals seeking more texture.”

Dimension profile has been in development and production scale experiments for over four years. It is immediately available, and recently launched at the 2016 Unified Wine & Grape Symposium.

Cooperages 1912 is a fourth-generation, family-owned company committed to crafting premium French, European and American oak barrels under the brands T.W. Boswell and World Cooperage. Over the past century, the Boswell family has crafted distinctive barrels that define the industry. The Cooperages 1912 team consults directly with winemakers to ensure an optimal pairing between wine and barrel.